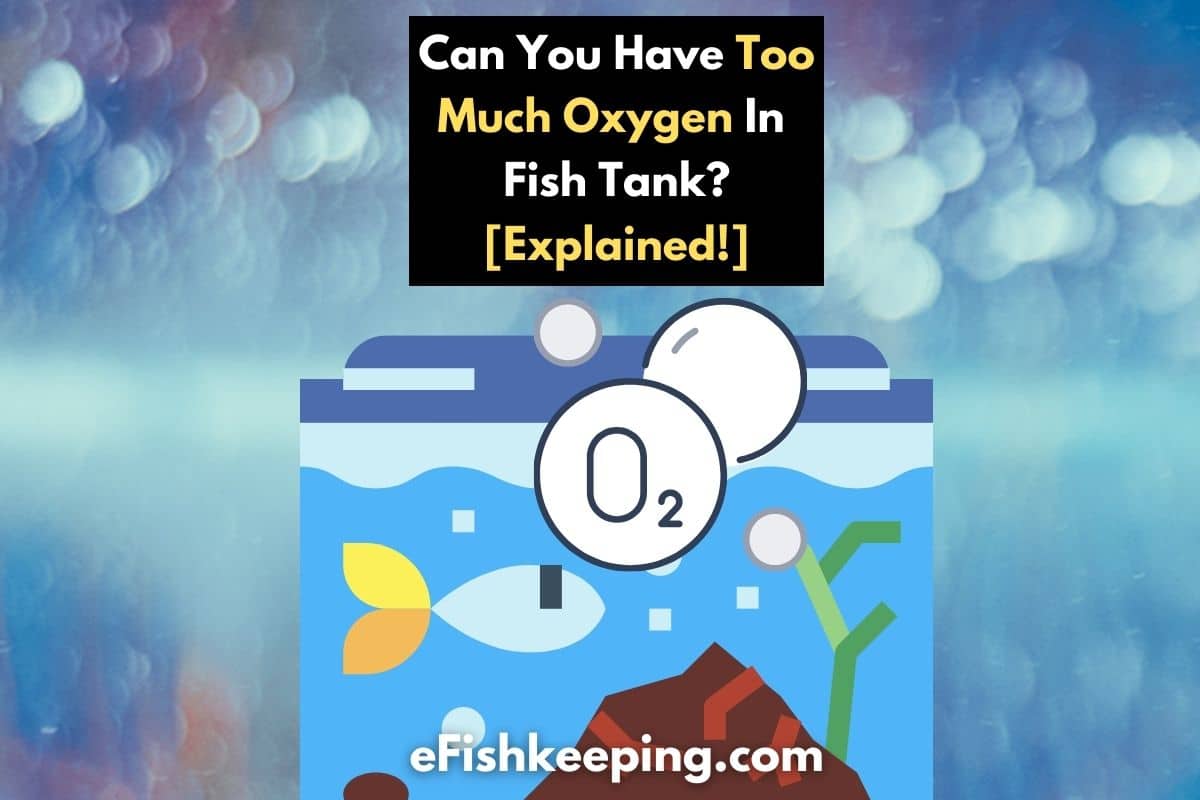 While using air stones, air pumps, and filters, we fishkeepers often think: Are we over-oxygenating our tanks? Having kept fish since childhood and owning three home fish tanks (at present), I understand your concerns. So let’s dive in together and explore the topic in detail!

Can There Be Too Much Oxygen In Fish Tank?

Theoretically, you can have an oversaturation of dissolved oxygen concentration in the water due to photosynthesis, rapid aeration and temperature change. However, in a fish tank, it is highly unlikely to occur.

When a particular water body remains stable, dissolved oxygen remains at 100% saturation (100% air saturation signifies water is holding as many gas molecules as it can in the equilibrium state.)

“The water keeps taking in the oxygen and other gasses from its surrounding atmosphere until it reaches an equilibrium state at the time of complete saturation.“

On the one hand, because of aquatic organisms’ respiration, the Dissolved Oxygen level remains lower. But on the other hand, factors like rapid aeration and photosynthesis mainly lead to supersaturation.

So technically, yes, water can get over-oxygenated. But in our fish tank conditions, normally, there are fewer chances that you will end up with it.

Note: Air Pumps and Air Stones are not oxygen tanks. They help oxygenate the tank but not as you would usually assume.

The surface agitation is what helps in dissolving the oxygen from the air.

The higher the surface agitation, the more will be the gaseous exchange. Therefore oxygen can dissolve into the water from the surrounding atmosphere more easily.

However, as per Henry’s Law, the dissolved oxygen content in water is proportional to the percent of oxygen (partial pressure) in the air above it. In an equilibrium state, the water will remain at 100% air saturation.

Long story short, in a fish tank, in normal conditions, to have your tank over-oxygenated is almost nearly an impossible occurrence (unless you are really serious and want to inject O2 by pressurizing the tank 😉 )

Signs of Too Much Oxygen In Fish Tank:

As a general rule, the dissolved oxygen level in a fish tank is recommended to be around 6-8 mg/L and 80-110% oxygen saturation. However, if the fish tank has anything above 115%, it can result in gas bubble disease in fish. So take the readings using a dissolved oxygen meter to see if you have too much oxygen in the fish tank.

I recommend you to have a look at a dissolved oxygen meter like this one (available on Amazon) to take readings. If the reading stays in the recommended range, you are good to go and hopefully don’t have too much oxygen in the tank.

Ask these questions to yourself:

If the answer to these questions is yes and normal, you won’t need to worry much about the oxygen. If everything seems normal, including the fish behavior, health, and appetite, that’s the sign you don’t have too much oxygen in the tank.

And to accurately know if you have if the fish tank is over-oxygenated, the best way is to take readings using a dissolved oxygen meter.

What Causes Too Much Oxygen In Fish Tanks?

In nature, water supersaturation is often seen across large waterfalls and hydropower dams.

The water that flows over the waterfall traps and carries the air with it, which ultimately merges into the water.

The higher the depth more will be the hydrostatic pressure, and so it also contributes to raising the saturation levels to be more than 100%

In nature, the live plants in the presence of daylight undergo photosynthesis. As you likely know, oxygen is released in the process.

Like plants, algal blooms in the water can also contribute to air saturation of more than 100%. This is because they release a lot of oxygen as the by-product of photosynthesis.

Now coming to another factor, when the temperature rises, the oxygen solubility decreases. And it is a fact that cold water can hold more dissolved oxygen compared to warmer water.

Let’s suppose, on a cold night, a pond has a particular dissolved oxygen concentration at 100% air saturation.

Now assume that the pond’s temperature increases after some time to a higher level.

As we have established, the water can hold less oxygen when the temperature increases.

So, in that case, the 100% air saturation should now be equating to a lesser dissolved oxygen concentration.

However, if there isn’t any aeration in the system (like wind) that could carry forward the equilibrium, the pond will still have the initial oxygen concentration. Therefore, rapid temperature changes contribute to the dissolved oxygen readings of over 100%.

What Happens If Fish Get Too Much Oxygen In Fish Tank?

If the fish gets too much oxygen, they can suffer from gas bubble disease. As a result of the disease, gas bubbles may form in the skin, eyes, gill, and fins. Moreover, hyperoxia can occur when the water oxygen level surpasses the normal atmospheric pressure.

Gas bubble disease mainly occurs because of exposure to water supersaturated with gases like oxygen, nitrogen, and carbon dioxide.

Some of the signs of this disease include:

Also, hypoventilation (that occurs in hyperoxia condition) leads to retention of carbon dioxide, which in turn causes respiratory acidosis.

Furthermore, due to hyperoxia, concomitant alterations to the antioxidant defense systems and higher levels of oxidative stress can occur.

How To Fix Too Much Oxygen In Fish Tank:

The best way to reduce too much oxygen in the tank is to reduce the water movement at the surface. So if you have a powerful filter, powerhead, or air stone that generates a lot of surface water agitation, reducing some of them should solve the issue.

Caution! Oxygen is quite essential for the survival of fish in the tank in general. So ensure you have at least one source of oxygenating equipment turned on all the time.

Actually, rather than oxygen, we need to be more concerned about the equipment’s water current.

At our home, we have a powerhead and top filter setup installed in one of our tanks. We also have an air stone in it. So when we keep everything on, three things help in generating the surface agitation:

We feel that keeping all the three equipment turned on all the time is not entirely helpful for the fish. So what we do is, we only keep the air stone on all the time, 24 by 7.

We only turn on the top filter and powerhead setup for a few hours a day. (In case you are curious, you can read how long a fish can live without filter and air pump here)

By following this, we have never had to face any significant issues so far. Just like most others, we do a weekly or bi-weekly water change.

Are You Noticing Too Many Bubbles In The Fish Tank?

You likely see a lot of bubbles in your fish tank. And that has probably made you think you have too much oxygen in the tank. But is that true? Sometimes the reasons can be different than what you may have presumed.

Here are some of the most likely causes of bubbles in the fish tank:

Have you recently done a water change? And is the temperature outside cold (maybe a winter going on)?

So if that’s the case, the water you add to the tank will be very cold. However, the tank is at a relatively warm temperature. So what happens when you put cold water into warm water?

Cold water tends to hold more oxygen than hot water. So when cold water gets into contact with warm temperature, the oxygen is supposed to be released.

Hence, you will see tiny bubbles all over the fish tank plants, decorations, and other parts.

So if that’s the case, you don’t need to panic 🙂 Just give some time, maybe a few hours, and the bubbles should pop away.

However, if you observe a ton of bubbles across the aquarium interior, generally, it indicates a large temperature change in addition to a large water change.

Ensure to monitor your tank properly because usually, a large water change can drastically shift the water parameters.

Your fish may not be able to tolerate it, and they may die.

By the way, you can also check out this resource where I explain why fish keep dying even though water remains fine.

#2. Film Has Developed On The Water Surface

Do you notice an oily, translucent film on the tank’s water surface? That film can be responsible for trapping bubbles (which would normally tend to pop at the surface).

Some causes of the issues include the oils coming off from your unwashed hands, feeding oily fish food, or any organic oils or proteins that could have made it to the top of the tank surface.

So if you notice such film development in your tank, I highly recommend you check this post on how to get rid of protein film in the fish tank.

Also, you can watch this video to get some helpful insights about micro bubbles in the aquarium:

If your tank has an excess of ammonia that hasn’t been broken down yet, you could be seeing bubbles coming to the surface. This problem mainly happens with newly started aquariums.

Usually, the problem is noticed when your tank is 1-20 days old. However, this issue can last longer as it can take a few weeks to establish the bacteria colony in the tank.

Do you have a fish like a betta or a gourami? Then the patches of the foam you observe are likely the bubble nest the fish has made.

Have you got live aquatic plants in your aquarium? And can you observe tiny but clear bubbles on the stems and leaves?

Then, it is the carbon dioxide-filled water capsules that occur during the process of photosynthesis. This thing is also known as pearling, and you can relax because it generally indicates great plant health.

Some medication treatments can alter the chemical properties of water. This can further lead to forming foam film on the surface of the water.

Generally, you don’t need to worry about it, as the foam should dissipate after you end the treatment.

In short, you can have less oxygen in a fish tank, but the possibility of having too much oxygen is quite less. For that, you will have to inject oxygen into a pressurized tank. In normal conditions, water slowly absorbs oxygen until an equilibrium stage occurs at complete saturation.

So I hope this guide has given you the right expectation and what to follow based on your situation.

I hope all your doubts are now cleared. Thank You, and happy fishkeeping!