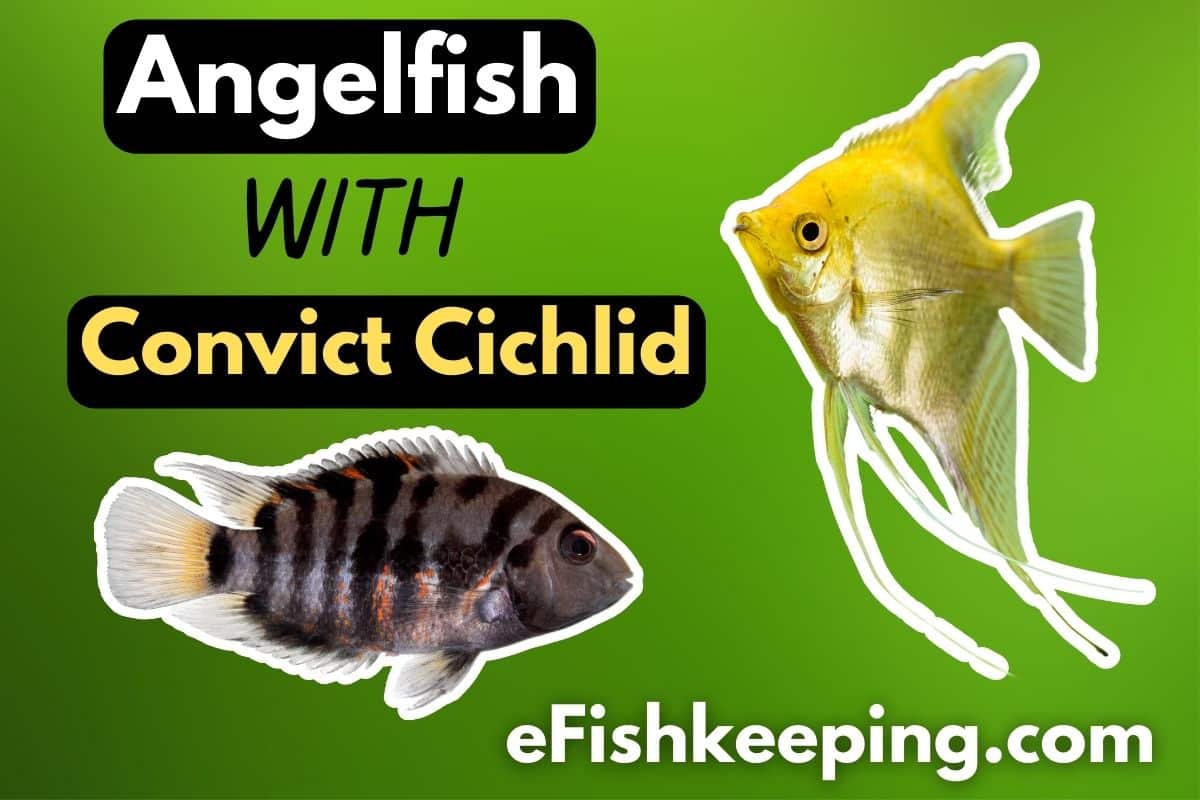 Alright, so you are interested in keeping Angelfish with Convict Cichlids. But wait, will it be a good match? Read on to learn more!

Can Angelfish Live With Convict Cichlids?

Generally, angelfish can’t live with convict cichlids because they can show aggression towards each other, and the angelfish will eventually suffer from it. However, even though very less likely, you can monitor and provide a large tank to test the combination and see if it works.

Understanding The Behavior Of Angelfish

Native to tropical South America, Angelfish are a freshwater fish belonging to the Cichlid family. They are popular in the hobby because of their unique arrowhead body shape and beautiful flowing fins.

They are commonly found in floodplains, slow-moving streams, and swamps.

Their natural habitat is swampy and has lots of vegetation.

Angelfish are active fish and keep swimming in the mid-level of the tank.

In general, angelfish are peaceful fish, especially when there is enough space in the tank where they can claim their own territory.

However, when kept with too many fish of their own kind, they can fight to defend their region or to claim a mate.

As a whole, we can consider the freshwater angelfish as semi-aggressive fish.

Even though they are semi-aggressive, they can get bullied. And unfortunately, their long fins make them easy targets for fin nipping.

Many fish tend to nip their fins, and maybe their long fins are too tempting to resist! Unfortunately, this can result in injuries and stress the angelfish.

Read: Do Angelfish Feelers Grow Back?

Usually, most aggression in angelfish can be attributed to the unsuitable tank mate you choose for them.

Hence, it becomes crucial to select the right tank mate.

As a general rule, with angelfish, you should keep peaceful fish that easily tackle the gentle bullying from angelfish. However, you should avoid aggressive fish, which would only add up to territorial behaviors.

Understanding The Behavior Of Convict Cichlid

Convict cichlids are freshwater cichlid species coming from Central America. In their natural habitat, they have enough rocks and woods where they can hide when not feeding.

They are typically omnivores and usually aren’t picky at eating things. Due to their looks, they are one of the sought-after fish in the hobby.

When it comes to behavior and temperament, these fish are quite territorial. They are known for their aggressive and territorial behavior.

So if a fish tries to enter the territory of a convict cichlid, it won’t hesitate to defend by chasing the intruder and harassing it.

If you can give convict cichlids enough space within the tank and keep them with appropriate tank mates, they should be happy.

They usually tend to spend the majority of the time inside their territory, caves, and plant matter. So it is important to have hiding places when you keep convict cichlids in the tank.

You can have plants, rocks, or driftwoods and try to mimic their natural environment.

Also, they love to move in the tank and don’t get afraid of exploring various areas of your tank.

In addition to spending a significant portion of their time in the middle of the tank, they often check the substrate and do some digging.

Why Keeping Angelfish With Convict Cichlids Not A Great Idea?

So if you have carefully read until now, it is likely understood why angelfish combination with convict cichlid is not a right fit.

Since there is at least some form of aggression on both sides, this doesn’t make them an ideal tank mate for each other.

Another problem is the angelfish is semi-aggressive, but it is not strong enough to withstand a fight with a convict cichlid (unless bigger in size). Angelfish are typically delicate fish with beautiful fins.

And even if you keep a small convict cichlid with an adult, large-sized angelfish, still there remain the chances of aggression.

Too much aggression and interaction for dominance over each other for a long time can eventually stress your Angelfish.

And remember, in general, the stress in fish can open the gates to fatal health issues like fin rot and dropsy.

That said, we can’t completely rule out the possibility of keeping angelfish with cichlids.

Fish Can Have Personalities As Per A Study

Fish can possess surprising complex personalities, a study suggests. Scientists from the University of Exeter researched the behavior of guppies in different situations.

And they found complex differences between individuals. As per the research, the tiny fish called Trinidadian Guppies have individual personalities.

Moreover, many people also consider cichlids to be one of the most personable fish.

So long story short, trying out the combination of two fish: convict cichlid and Angelfish, may give results (although probably less likely).

But for trying that too, there are some specific criteria to minimize the chances of failure and ensure safety.

#1. Tank Is Quite Big, Providing Enough Space For Both

Here’s a rough guideline of the space required for each fish species.

When fully grown, on average, the size of a convict cichlid is around 4-5 inches. On the other hand, common angelfish can usually reach a maximum length of 5-6 inches.

So I hope you have a good general idea of how much space you would need for both these fish in a tank.

It would always be better to have extra space in your hands, considering the aggression tendency of these fish. Having a big enough tank where all the fish have their own territory, there would be lesser chances of interaction and fights.

#2. Size Of The Angelfish Is Relatively Bigger To Balance The Dominance

When keeping angelfish and convict cichlids together, it is crucial to consider their size differences.

An angelfish can be an easy target, and its fins may get ripped by an aggressive, bigger convict cichlid. So to counterbalance the aggression, you can add small-sized convict cichlids with your relatively large angelfish.

You can add juvenile convict cichlids to the tank of adult angelfish. Then, it is likely that the angelfish could establish a pecking order, and things would settle.

Pecking order is a social hierarchy type in which the individuals in a group are ranked based on behavioral or physical dominance. It is also often referred to as dominance hierarchy.

Moreover, if the combination works initially, then there’s also a chance it will remain as it is.

This means even when your convict cichlid grows adult, it will be tolerant and compatible with the angelfish as it has been growing with them. Although the main point is the temperament of the fish, and that is what largely determines the compatibility.

#3. The Tank Has Many Hiding Places

Ensure to add hiding places, be it in the form of caves, plants, or driftwood.

The fish will feel more relaxed when there are enough hiding places in the tank to rest. Also, the chances of interaction among the fishes will be less, which is another added benefit.

Moreover, in case of minor bullies or fights among the fish, they can easily cope with the situation by resting in their respective hiding places.

#4. Monitor The Combination & Be Ready To Separate If Things Go Wrong

Last but the essential condition is appropriately monitoring the combination of convicts with angles. Since there is a risk of aggression, you should always be ready to separate the fish when situations go out of hand.

What To Do When The Angelfish And Convict Cichlid Combination Doesn’t Work?

You can have a tank divider like this one available on Amazon, which can be handy at times of hurry (and for a temporary solution to the problem)

If the angelfish and convict cichlid don’t go well with each other, you can separate either of them in a different tank.

Then, you can either return it to the pet store from where you got it.

And if you have a friend eager to take the fish, that’s great. But yes, be sure to inform them of the complete problem, so they don’t run down any issues later on 😉

Alternative Tank Mates You Can Try With Angelfish

Here are some of the tank mates you can try out with angelfish:

Although in the wild, angelfish typically live with thousands of fish. However, their territorial and aggressive tendency can increase in closed tank conditions. So avoid keeping angelfish with other fish that get intimidated by a pushy fish.

Moreover, don’t put angelfish with non-fish tankmates like shrimps, crabs, etc., as the angles may attack and disturb them.

Alternative Tank Mates You Can Try With Convict Cichlids

Here are some of the tank mates you can try out with convict cichlids:

If you don’t like even the slightest signs of aggression in your tank, your best bet would be to keep them alone. You can keep only one convict cichlid or put a combination of male and female in the tank.

Avoid adding more because that would raise the chances of aggression.

Also, don’t add a male and female in the community tank! This is because they can be aggressively territorial during the breeding process.

If you are experienced enough and looking for convict cichlid tankmates, ensure not to keep them with small or less aggressive species. And try to select large species of fish that can stand their own ground.

In short, the combination of angelfish with convict cichlid is not ideal because of the possibility of aggression among them. However, even though it is less likely to go well, if you are experienced enough, you can try out this combination with needful monitoring and care.

So that’s it! I hope you enjoyed reading this post and got a clear picture of keeping angelfish and convict cichlid together.

If you found any value in this post, please share it with others as it increases the reach of the content and motivates me to create more and more content for you. So thank you and happy fish keeping.