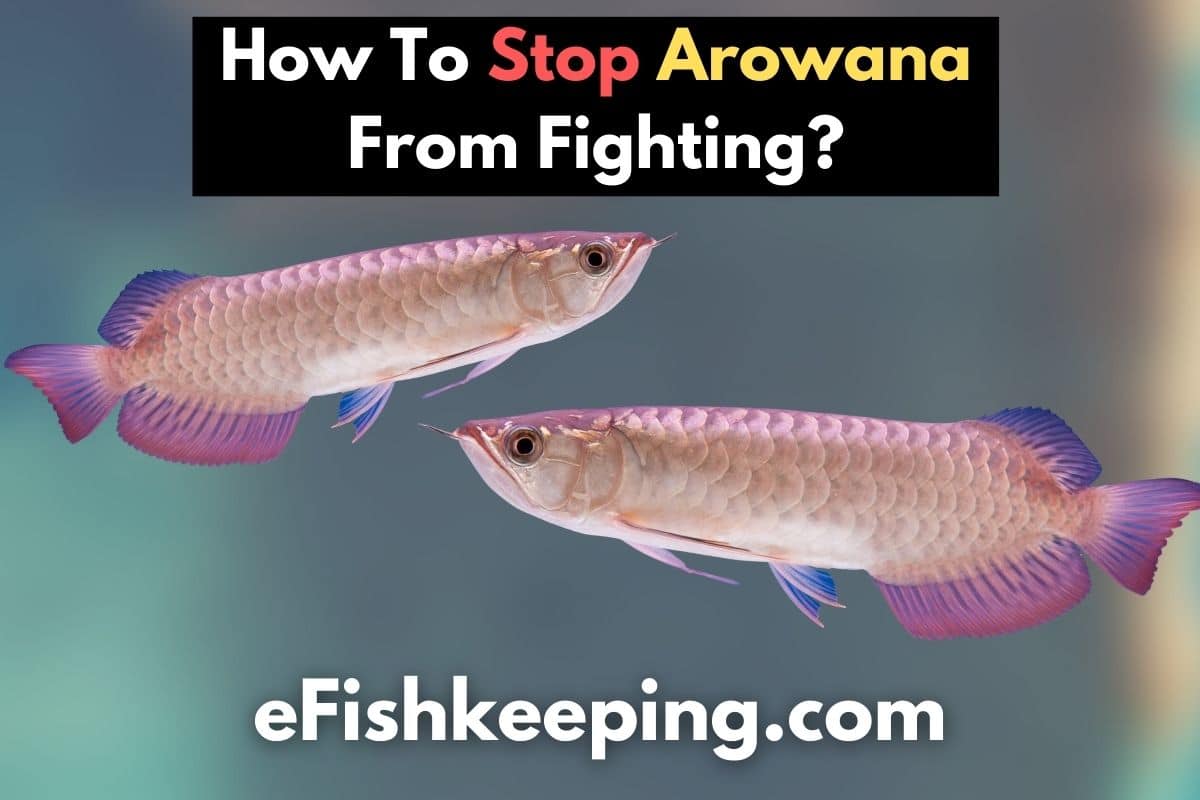 You have Arowanas in your fish tank. But they keep fighting with each other? Don’t worry, you are in the right place.

Arowana fish are predatory fish by nature. When housed improperly, Arowana fish will fight for dominance, to protect their territory, if they’re overcrowded, hungry, or more. In order to stop your Arowana fish from fighting, you must either separate your Arowana from its tank mates or upgrade the size of your tank.

Continue reading to learn more about why Arowana fish fight, if they are always aggressive, how to stop your Arowana fish from fighting, and more.

Why Do Arowana Fight?

1. Arowanas Fight to Protect Their Territory

Many wild animals, such as wolves, lions, and hippos, are territorial. The Arowana fish falls into the same category. Since Arowanas are prone to aggression naturally, when housed in a confined space, they may turn against other fish to defend their territory.

2. Male Arowanas Will Fight Other Males for Dominance

Since Arowanas are prone to aggression, it’s better to keep them separate from other Arowanas. However, if there are more male fish in the aquarium than females, things can get out of hand.

Male Arowanas battle other males to demonstrate authority and power so that females perceive him as a better mating partner. During the mating season, such confrontations are considerably more likely. As a result, you should be aware of male fish battling and take appropriate action.

When there are more male fish in the tank than females, however, the males may assault the females during mating season.

3. Arowanas Will Fight if There Are Toxins in the Water

In different phases of the nitrogen cycle, fecal wastes from fish transform into ammonia, nitrites, and nitrates. This, in turn, can have an impact on your fish tank’s ammonia levels. There should be no ammonium in a tank in an ideal world, but since fish waste produces it, there’s no way to avoid it.

If you don’t replace the water regularly, the fish will suffer significantly from the pollution. Stress makes the fish aggressive in many circumstances. This will simply exacerbate the impact of your Arowana fish’s hostility since they are already prone to violence in nature.

4. Arowanas Will Become Aggressive if Hungry

Many fish can change their character due to a lack of food. If the omnivorous fish cannot locate enough food to survive, they will attack other little fish for nourishment. When hungry, fish with a predatory temperament, like the Arowana, may readily attack other fish in the tank for a snack.

5. Arowanas Will Fight if Overcrowded

When keeping Arowana in a tank, make sure there is enough room for them to move around. You should never overcrowd your aquarium with ornaments or tankmates. Arowanas are inherently aggressive and will attack one another in order to acquire adequate room to swim freely.

How To Stop Arowana from Fighting?

1. Separating Your Arowanas from Other Fish

Attempt to distinguish between inherently aggressive fish and those that are not. Arowanas, except for the silver and black varieties, are known to be territorial and aggressive. The Australian is the most aggressive of the group, attacking and killing any tank mates that reach a height of 12 inches or more.

Since Arowana fish are notorious for being aggressive, keeping them in different tanks is better. Consider the potential tank mates while planning your aquarium design to avoid future confrontations.

Tank Mates Silver Arowana When you combine that with their proclivity for violence, you’re left with few alternatives when it comes to tanking partners. Adding more fish to the aquarium is often hit-or-miss. Since each Arowana fish is unique, you must keep a close check on them to ensure that they get along.

It’s usually preferable to offer your fish plenty of room to move about. Although larger tanks can be more expensive, they can save you the heartbreak of losing your favourite fish.

A 60-gallon tank may house a juvenile Arowana, but a full-grown Arowana requires at least 250 gallons. You could also think about putting their tank in a low-traffic part of your house. However, due to their squeamish nature, Arowanas require a lot of room with no rapid movements or intense lighting. The more tank room you can provide your predatory fish, the better.

The Arowana is a carnivorous predatory fish. The Arowana fish bring their aggressive temperament to the tank and will consume everything that fits in their jaws. They will not only attack other species, but they will also battle among themselves.

As the Arowanas increase in size, their hostility becomes more apparent. It’s difficult to keep more than one Arowana in the same tank.

Which Arowana Species is Considered the Most Aggressive?

Arowanas, except for the silver and black varieties, are known to be territorial and aggressive. The Australian is the most aggressive of the species, attacking and killing any tank mates that reach a height of 12 inches or more.

The reddish or pinkish dots that trace down the margins of the Australian Arowana’s scales give it a glossy look.

Do Arowana Fish have Teeth?

The mouth of an Arowana fish opens in three sections and is placed near the top of the body. The jaw, tongue, palate, and throat are only a few of the oral bones that have teeth. Arowanas also have two barbells on the lower jaw’s extremity.

Can You House Arowanas Together Peacefully?

Keeping Arowanas together can be a difficult task. Younger Arowanas can be effectively kept in groups of 6 or more, depending on the species.

However, when they grow older, your Arowana will become territorial and violent, and you will need to separate them. You’ll need a huge pond or farm if you wish to raise mature Arowanas. You can retain approximately six adults in a big setting and utilize dividers to create regions with more space.

How Can You Tell If Your Arowana is Stressed?

When agitated, an Arowana can become violent. Check to see whether the water quality has deteriorated or if the water is in poor condition. If the Arowana isn’t getting enough food, it might become hostile. Some Arowanas have hostile personalities as they mature, and you may need to separate them.

Will Arowanas Bite Their Owners?

Arowanas have been known to bite several aquarists, especially during feeding and cleaning times. When Arowanas are being hand-fed or if they are fighting for food in a communal tank, the hazards are greater. To avoid an Arowana bite, employ dividers such as a net.

Is It Legal to Keep Arowana Fish in the United States?

It is unlawful to own or import any species of Asian Arowana in the United States. Scleropages formosus was the original name for the Asian Arowana, but it has subsequently been separated into multiple species, all of which are protected.

Unfortunately, the Arowana is classified as an endangered species. Initially, the primary threat to these fish was collecting for the aquarium trade. However, when various countries-imposed trade restrictions, habitat loss and degradation continued to plague the slow-reproducing species, and it is still listed as endangered.

Owners have also been known to purchase larger tanks, which can also help your Arowana coexist with your other species more calmly by reducing overcrowding.