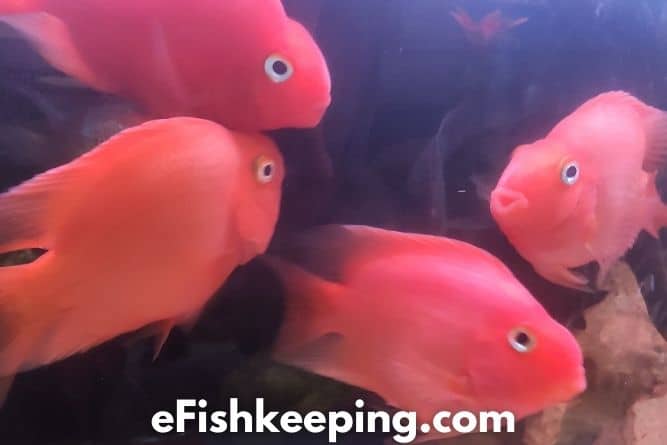 Hey, I have 4 parrot fish (blood parrot cichlids) in my home fish tank. And I exactly know all the problems that you are facing right now.

In this article, I’m going to share my experience as well as knowledge about why parrot fish fight and also how to stop them. If you are serious about fishkeeping, then I highly recommend you to take some time and read this article till the end because many of your doubts will be cleared.

So without any delay, let’s dive in!

Although parrot fish are calm, at times they become aggressive and territorial. The most common reason they fight is because of territorial behavior. Also, there could be other reasons like not having enough space in the tank or if the tank is overcrowded with fish.

Let’s discuss the reason why do parrot fish fight in a bit more detail.

Here’s my video on why parrot fish fighting and how to stop it. So you can watch it or else continue reading.

There are cool and calm fish that don’t bother much about other fish in the tank. Whereas, there are other fish that do exhibit territorial behavior.

In simple words, you can understand it as the habit of any fish of protecting its territory or area from others.

At times, parrot fish do show this behavior. So whenever another parrot fish tries to come near, it attacks.

Now although parrot fish are calm, this behavior is generally triggered because of not having enough space which is the next reason why parrot fish fight.

If your fish tank doesn’t have enough space then most probably your parrot fish will become territorial. They will try to protect their territory and fight for space.

It may happen that when you brought your parrot fish they were small. But now they have grown bigger.

So make sure your tank is spacious enough for your parrot fish.

If the tank is over-stocked then your parrot fish will fight for food and space.

Whenever you give food, you will notice that some parrot fish especially, the dominant ones will try to eat more and don’t allow other parrot fish to eat properly.

This could eventually result in less growth of the fish being bullied by the other parrot fish. Also, they will fight for space if you have too many fish in your tank.

So it is good to not overstock your tank.

How do I stop my parrot fish from fighting?

To stop parrot fish fighting, have enough hiding places, make the tank less crowded, and feed them properly to make them feel a bit relaxed. However, if nothing works then the only solution is to separate the parrot fish from each other in the same tank or into different tanks.

You can’t tell your parrot fish to calm down and they will! 🙂

Jokes apart, here are the precautionary measures you can take to avoid the parrot fish fighting.

And sometimes that dominant parrot fish can get angry enough to indulge in a vigorous fight. Which you won’t want to happen, isn’t it?

So the best thing is to have hiding places.

In my home tank, I have two rocks and one of my 4 parrot fish always gets bullied by others. And so whenever it gets attacked, it hides under the rock.

And as there’s a saying, Out of sight out of mind! After some time, the parrot fish gets cool down and the fight stops.

I recommend you to choose hiding places like this one available on Amazon. If you have multiple parrot fish in your tank then you can purchase multiple sets of it. Or otherwise, you can combine with other caves structures suitable for your parrot fish.

Why hiding places can be a game changer in controlling the fights? Because they can play a crucial role in creating a sort of visual break in the tank among the parrot fish. It can provide place to hide for the fish that is constantly bullied by others.

Plus, it also reduces the chances of interaction and territorial fights up to some extent as most of the time your parrot fish will be near the hiding place if it starts loving it.

If you have too many fish in a tank then obviously the fish will be fighting for space, isn’t it?

See, always try to think about any problem based on the basic concepts.

What basic things do your parrot fish want? A good place to live, enough space, enough food and that’s it, right?

Therefore if you have enough space for your parrot fish. Then there will be very less chances of them coming closer, bullying each other, and indulging in a fight.

Now, I know you may ask how do I know if my tank is overcrowded or not? Well, I think you shouldn’t stress that much.

Just take a look at your aquarium and observe. Do you feel that your 2, 3, or any number of parrot fish you have, are moving around with enough space? If yes, then okay.

If you feel that the fish are colliding with each other or are feeling suffocated because you have much fish. Then, you have to surely make some plans to reduce the over crowd in your tank.

Once you do this and make sure to give enough space to each of your parrot fish. Then chances of parrot fish fighting will decrease.

Now, this is my personal tip based on my own experience.

What I have seen in my case is whenever I delay or forget to feed my fish, they sort of get angry on me! Have that happened to you?

They just keep moving around the tank as if they are complaining about not feeding them on time. But once I feed them enough food and also on time (especially talking about my parrot fish)

They just eat and then just get calm down and feel relaxed. The movement of parrot fish in the tank also decreases.

So what I think is you should feed your parrot fish properly and adequately. I only feed my parrot fish once a day. But the quantity is enough that they can feel relax and they no more feel hungry.

You can also do the same and I think it will help to reduce the aggression in your parrot fish.

Get this here (on Amazon)

No matter whatever you do, sometimes things don’t happen as you wish. There are lots of factors and sometimes it is the behavior of the particular parrot fish that you can’t change.

And if that’s the case then the only thing you could do is separate your parrot fish in the same tank or in another tank.

You can get a glass or any kind of partition and keep that in your tank to avoid the parrot fish fight. I know, then you would have to compromise with your tank’s beauty and all that.

But what else can you do, just think?

You can avoid the situations that trigger the fight by providing proper space and hiding places.

You can feed them to feel relaxed and anything like that. But even if then you can’t completely change their aggressive behavior then what are you left to do? Just separate them, isn’t it?

Or else, you can also get a bigger tank. Maybe you haven’t noticed but your cute parrot cichlids may have grown bigger than what they were, when you got them first.

If you are a serious fishkeeper and your fish are outgrowing the tank, then investing in a nice big fish tank is indeed a good investment. Isn’t it? 🙂

Can two parrot fish live together?

Yes, two parrot fish can live together but not always do they go well with each other. Sometimes they are just calm and don’t bother each other whereas sometimes they bully and attack each other so, proper care, and enough hiding place is needed.

As I have said, I have 4 parrot fish in my home fish tank. When I added them at first they were not so bothered about each other.

But as days went some of them became territorial and started to protect their space.

But since I had hiding places it wasn’t that much problem. As days went on, things started to settle down.

Now what I observe is the 3 of the 4 parrot fish have understood each other well. And now they don’t bother each other that much, except they lttle bit of push each other.

But the only 1 of them whenever bullied, hides under the rocks.

But it is also okay and not that much to worry about. Whenever I feed them each one of them is busy eating their food except few pushes among each other sometimes

All 4 of the parrot fish have grown bigger since I brought them home. I and my dad take care of them.

So yes, you can keep them in pairs provided you take proper care and give proper food, environment, and enough hiding places.

Can parrot fish kill each other?

Yes, sometimes the fight between parrot fish can be such that they may get stressed and may eventually get killed. So whenever they fight violently, just separate them. However, don’t worry because mostly they just settle down after few days if you have enough hiding places in the tank and if you provide proper food and environment.

Personally, this haven’t happened with myself so I don’t think that parrot fish can be ferocious enough to kill another parrot fish.

But prevention is always better. So always make sure to keep an eye on your parrot fish.

So I hope now you have clearly understood why parrot fish fight and also how to stop your parrot fish from fighting. Please share this article if you found it valuable.

Thanks, best wishes for you as well as your parrot fish 🙂

Do parrot fish fight each other?

Yes, parrot fish fight with each other mostly because of their territorial behavior, less space in the tank, or if the tank is overcrowded. However, parrot fish are mostly calm if they are provided proper food, space, and environment to live.

Why my parrot fish attacking the other one?

Generally, one parrot fish attacks the other one mostly because of their territorial behavior. Also, there could be other reasons like not having enough space or if the tank is over stocked.

Yes, blood parrot fish can eat other fish especially, the smaller ones. Even if the fish is not small but if gets involved in the fight with parrot fish, then it may get stressed and injured.

Yes, parrot fish are aggressive but not too much unless they are triggered due to lack of space, overcrowded tank, or other causes. So parrot fish can be considered a semi-aggressive fish.