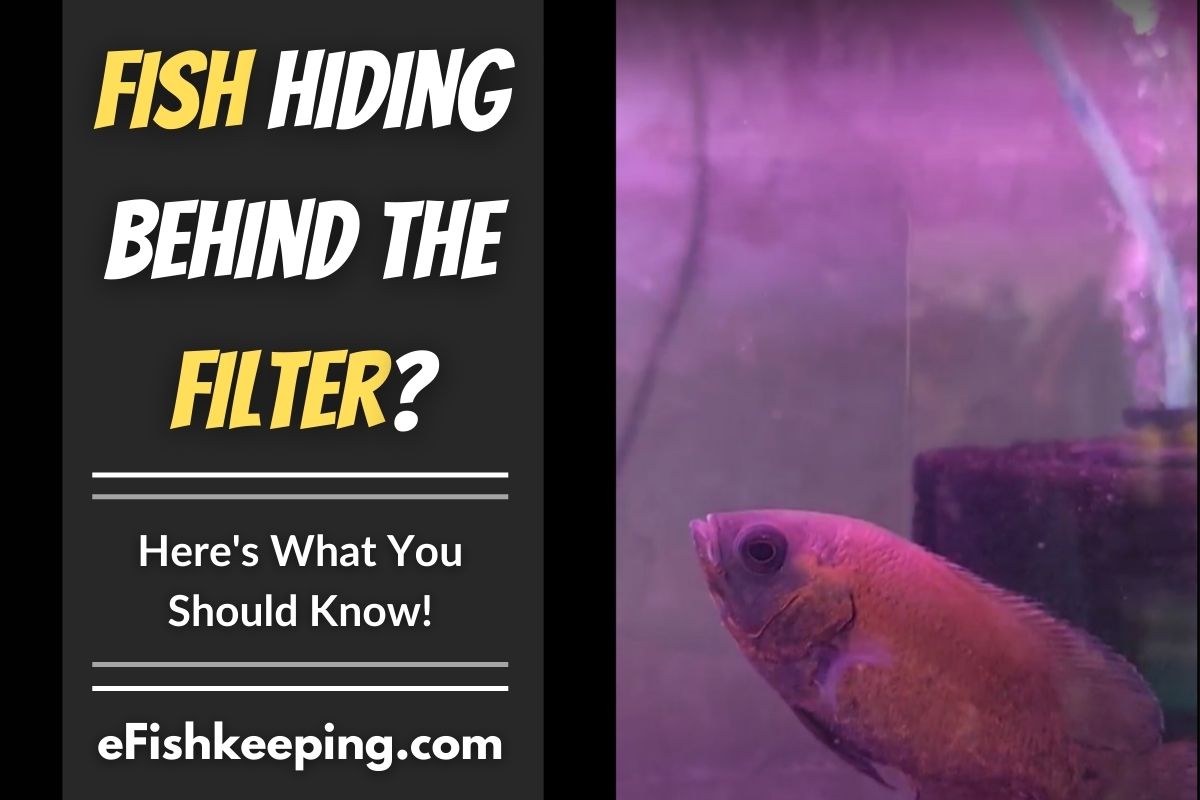 Every fish has its own defense mechanisms, and as a result, if your fish feels threatened by something they don’t understand or becomes ill, they will most likely seek refuge behind the tank’s filter.

However, is this the only time your fish might hide? And should you be concerned if they suddenly start hiding behind the filter?

If your fish are hiding behind the filter input despite the fact that they have lots of other hiding spots, it’s possible that the water quality in your tank could be poor.

However, hiding behind the filter in the tank, on the other hand, can also be a way for your fish to signal that something is awry. For example, your fish may be sick or overcrowded.

What Is the Normal Behavior of Fish?

Depending on the species of the fish you are housing in your tank will depend on the normal parameters of their behavior.

For example, a goldfish will swim around a tank much more leisurely than a tetra who darts from side to side.

Nonetheless, a fish should remain constantly swimming, with a healthy fish only stopping and resting upright near the bottom of the tank to sleep.

If provided with adequate space, food, water parameters and hiding places, there should be no reason as to why your fish should hide behind the filter.

Therefore, if you notice your fish begins hiding behind the filter suddenly, this should be taken as an indication that your fish is stressed, and something is wrong.

Why Do Fish Hide Behind the Filter?

Since hiding behind a water filter is not considered a typical behavior of most fish species, owners should take this behavior as an indication that something in their fish tank is wrong.

The most common reason a fish may begin hiding behind a filter suddenly is due to the water quality. However, this behavior can also indicate an illness, injury, overcrowding, stress, pregnancy, a lack of stimulation and more.

What are the Reasons Why a Fish is Hiding Behind the Filter?

#1. Hiding Behind the Filter Can Indicate that Your Fish is Overcrowded

In the wild, most fish are not restricted to limited areas and therefore, overcrowding your fish tank can result in bullying and stress and cause your fish to hide behind the filter.

When fish are overcrowded, some species can turn aggressive and stress out their tankmates, causing them to look for places of shelter like behind the filter.

#2. Hiding Behind the Filter Can Indicate that Your Fish is Hurt, Sick or Injured

If your fish is injured, they will hide more often. In the wild, a fragile animal is more likely to be preyed upon, thus, it will do everything it can to hide its misery.

Read: Why Is My Fish Swimming In Circles? (Explained)

#3. Hiding Behind the Filter Can Indicate that Your Water Quality is Poor

If your fish is hiding behind the water filter, use an aquarium water test kit to check the water parameters in the tank.

When your tank is dirty, much of the oxygen produced by the filter system escapes through the water surface, leaving just the region immediately adjacent to the filter with plenty of oxygen for your fish.

#4. Hiding Behind the Filter Can Indicate that You Just Recently Introduced your Fish to a New Environment

If your fish is brand new to the tank, they may hide for the whole day until they feel secure. This is a pretty frequent symptom with most fish, and it’s nothing to be concerned about.

There isn’t a remedy for this, unfortunately. All you can do now is attempt to keep the tank peaceful till your fish feels more at ease. It could be a good idea to turn off the lights in the tank and make sure it isn’t being disturbed for a bit.

#5. Hiding Behind the Filter Can Indicate that Your Fish Feels Threatened

While certain species are simply timid or shy and will hide whether or not they are agitated, aggression from other members of your tank community is one external stressor that may cause your fish to hide behind the filter in your tank.

The majority of the time, aquarium fish hide when they are disturbed by external circumstances or internal health concerns.

Therefore, if you begin noticing your fish hiding behind the filter in your tank, you should start observing the behavior of the other fish in the tank to ensure your fish is not being bullied.

#6. Hiding Behind the Filter Could Indicate Your Fish is Pregnant

Females who are pregnant will try to hide behind the filter in the tank. This is due to a sense of vulnerability or the fact that they are being bullied by other fish.

It’s quite natural for a pregnant fish to spend more time hiding or seeming to investigate the aquarium’s plants and decorations. This is an indication that she is on the verge of giving birth and is seeking for a comfortable spot to do it.

Unfortunately, a female may opt to hide behind the filter in a tank owing to the improved water quality near the filter. This indicates that she is just one or two days away from giving birth.

Read: At What Time Do Guppies Give Birth?

#7. Hiding Behind the Filter Can Indicate that Your Fish Does Not Have Adequate Hiding Places

Especially in a communal tank, hiding places and the tank’s decor become essential in maintaining the health and happiness of your fish.

When a tank is not provided with adequate hiding places, the fish who reside there will look for shelter places, which can include the filter.

This, unfortunately, can pose a problem since some filters can suck up the fins of your fish, causing them to get stuck.

Small fish can potentially get pulled into the input of a water filter if the filter is overly powerful. To prevent this problem from occurring, supply your fish with ample hiding spots to keep them away from the filter.

#8. Hiding Behind the Filter Can Indicate that Environmental Problems

Fish are sophisticated creatures who require a high level of stimulus to remain happy. Unfortunately, a bored fish may resort to hiding merely because they are miserable.

To boost the amount of stimulation your fish receives, try adding a variety of different toys, plants, and decorations to the tank, or consider keeping your fish company with a couple of tranquil tankmates.

Although certain fish species have a reputation for being hostile, others get along with most fish species and are typically happier as a result of the companionship.

Since loneliness is a human feeling, fish do not experience it in that setting. Bettas, for example, are solitary in the wild and do not require or desire tankmates when housed in our tanks.

On the other hand, a fish can get bored and unhappy if not given enough stimulus. As a result, several fish species prefer to live in groups rather than alone. This, however, is dependent on the fish species and their biology.

How To Make My Fish Normal and Prevent Them from Hiding Behind the Filter?

#1. Correcting Water Parameters Can Keep Your Fish from Hiding Behind the Filter

When nitrate levels in the water are high, nitrite in a fish’s blood binds to hemoglobin in the blood cells, impairing its capacity to transport oxygen.

Your fish may suffocate as a result of this. As a result, the fish migrate to sections of the tank where breathing is less difficult.

To eliminate excess ammonia and nitrites from the water, you may rapidly and efficiently cure the problem by doing multiple modest partial water changes.

However, don’t do a complete water change at once since this may shock and even kill your fish. Instead, replace 20% of the water and repeat the activity a few hours later. In extreme circumstances, you may need to change the water again the next day.

#2. Treating Any injuries or Illnesses Can Keep Your Fish from Hiding Behind the Filter

Knowing your fish, including how much they eat, swim, and appear, as well as whether they prefer the surface, middle, or bottom of the tank, will go a long way toward determining if they are sick or not.

Fish, like any other living creature, change their appearance and behavior when they are ill.

Not just for the afflicted fish but for all the fish in your aquarium, recognizing these changes early might be the difference between life and death.

Once a disease, fungus, or parasite strikes one fish in such a tiny and confined habitat as your aquarium, it may quickly spread through the water to all the others.

If you believe your fish is sick, remove them from the community tank and take them straight to the vet for diagnosis to prevent further sickness.

#3. Removing Bully Fish from the Tank Can Keep Your Fish from Hiding Behind the Filter

When a smaller, more aggressive fish bullies it, it will seek for hiding spots to avoid unwanted attention.

Separating aggressive fish from passive fish can assist in reducing this form of hiding.

Another method is to reorganize the tank’s décor in order to disturb established territories, forcing each fish to re-establish its own niche in the tank.

#4. Addressing Environmental Concerns Can Keep Your Fish from Hiding Behind the Filter

It may seem contradictory, but if your fish tank lacks suitable hiding areas, they may find them more frequently hiding in the same spot. The reason for this is that they do not feel secure.

Most fish in the wild are prey to larger fish. Thus, they prefer to be in locations with a lot of hiding places.

If your fish feel like they’re too exposed and have nowhere to hide, they’ll return to the same hiding spot repeatedly.

The apparent solution is to provide them with a lot more hiding places.

Caves, driftwood, and plants will provide your fish with a variety of fascinating hiding spots. These objects will not only make your fish feel protected, but they will also provide them with plenty of areas to explore, so they don’t get bored.

Since hiding behind a water filter is not a common behavior among most fish species, owners should interpret this behavior as a sign that something is amiss in their fish tank. The most typical cause for a fish to suddenly begin hiding behind a filter is poor water quality.

On the other hand, this behavior might suggest a variety of things, including disease, injury, overpopulation, stress, pregnancy, a lack of stimulation, and more. A healthy fish should swim continuously, pausing only to rest upright towards the bottom of the tank to sleep.

As a result, if your fish is given enough space, food, water parameters, and hiding spots, there should be no incentive for them to hide behind the filter.

Consequently, if you observe your fish suddenly hiding behind the filter, this should be considered a sign that you need to figure out what’s causing your fish to hide and rectify the situation.